A New Part of Me 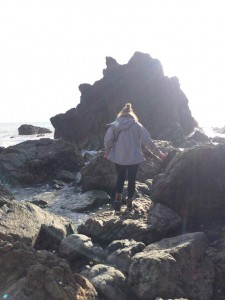 It is scary to think that even millions of miles away from home, one place could change my outlook on life forever. I would have never guessed that I would be learning new things about myself while I was in Ireland. These things were aspects of life that I have never considered before. Later on in my trip I felt even more at home while venturing to Howth, Ireland. This place was the green countryside seen in pictures and the ocean views one dreams of.

The hike we were about to endure was 10 kilometers long and pretty tough, but beautiful measures. The weather was the perfect Ireland day, meaning it was a little windy and rainy, but clear sky otherwise. The biggest obstacle of this hike was the gigantic mud puddles. The path was covered with these big piles of brown slush with big chunks of slime in the middle. The only way to move on was to walk straight through them. Lets just say our shoes were ruined by the time we got back on the train.

The second the hike started I felt pretty good about being away from the city life for just a short while. At home I live in a rural area so it felt comforting to be back in the peace and calmness of the outdoors. Once we reached a certain point we sat down on a couple rocks over looking the beautiful ocean. The way that the sun hit the water was something extraordinary. It might have been the people I was with, but I was having the best time I’ve had in a while. It was eye opening to me because I wasn’t in a bar, at a house party, or at a concert. I was outside with great friends in the peace and quiet and I was at ease. I was content with how my day, week, and experience were going abroad.

I have always been the kind of person who wanted to be in the center of the action and never missed a party. At this point in the trip I felt happier than I ever had before and it scared me a little. I felt like I had discovered a new side of me that was content with being somewhere quiet, with minimal people, and no commotion. I was appreciating the moment through my own eyes and not through my phone or wondering what other people would think.

Continuing on the way around the cliffs, I couldn’t stop thinking about how I was feeling. About half way through the hike we took a trip up to the local restaurant called the Summit Inn. When we first got there we were surprised at the lack of customers they had for the location and time of day. There was only one other couple in there around 12:30 and there did not look like many employees were working at the time either. Everything and everyone in the town and restaurant seemed to be taking everything at a leisurely pace. No one seemed to be in a rush or worried about what they needed to do next. They were living in the moment and were completely content and happy. They all seemed to be feeling the lonely and happy feeling that was entering my world at that very moment.

As the day went on I continued to be ok with the different kind of happiness I was feeling. I was not scared about the way I was feeling. I was happy about my new discovery and to see where this new part of me would take me in my everyday life in Ortigia and back home in America.